A cohort of 4,837 Dutch patients with a history of myocardial infarction.

Financial support for data visualizations was obtained from BBMRI.NL

Design of the Alpha Omega Trial

The Alpha Omega Trial had a 2×2 factorial design. Patients were randomly allocated to one of the four groups that received either a targeted additional amount of 400 mg/day EPA-DHA, or 2 g/day ALA, or both, or a placebo containing the monounsaturated fatty acid oleic acid. An intake of 400 mg EPA-DHA and 2 g ALA per day is equivalent to the Recommended Dietary Allowances of these fatty acids.

To study the effect of EPA-DHA and ALA on major cardiovascular events, four different enriched margarines were developed by Unilever R&D, Vlaardingen, The Netherlands.

How much margarine did the participants consume?

The margarine was used on bread and not for frying and baking. On average, the participants ate 4.3 slices of bread per day, each spread was 5.1 grams of margarine. So with an estimated consumption of approx. 20 grams of margarine per day, this composition would ensure an increase in the daily intake of EPA-DHA of on average about 400 mg (equivalent to intake from approximately 2 servings of fatty fish per week) and the intake of ALA by 2 grams per day.

All four margarines were similar in concentration of linoleic acid and in taste, smell and appearance, as thoroughly tested by panels. Patients were asked to avoid the use of fish oil capsules or other omega-3 supplements during the trial. 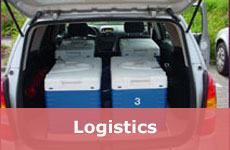 The margarines were produced by Unilever R&D every six months and stored at -20˚C. Upon inclusion in the study, the patients received six tubs of trial margarine to bridge the gap until the first delivery. Thereafter the patients received eight tubs of margarine every 12 weeks by refrigerated courier transport (Valid Express, Amsterdam), under supervision of a specialized logistics company (L.O.F. bv, Egmond aan den Hoef). Any remaining tubs were returned by the subjects to the same logistical company when the next delivery came. The number of returned tubs was registered to calculate actual margarine intake at the end of the study.

Participants consumed over 442,073 tubs of trial margarine, which were brought to them over the course of 66,503 deliveries.

Randomisation tables were stored in a safe under supervision of a third person at Wageningen University who was not involved in the trial. Treatment codes remained sealed for research staff and committee members of the Alpha Omega Trial during the course of the trial.

The Alpha Omega Trial was designed to examine whether major cardiovascular events could be prevented by low doses of omega-3 fatty acids (incorporated in margarines) in 4,837 Dutch patients with a history of myocardial infarction.

Patients were enrolled from 2002-2006 and the trial was completed in 2009. Follow-up of the Alpha Omega Cohort for cause-specific mortality is still ongoing.

Take a look at the main publication on the Alpha Omega Trial. More publications >